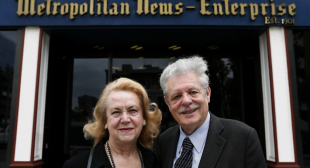 The June 7th, 2022 election for LA County Superior Court Judge between disgraced and dishonored incumbent Judge Carol Elswick and Attorney Albert Robles (Former Carson Mayor) is causing Roger M Grace, the Metropolitan News Publisher, Editor, and Reporter, to lose his journalism compass and self-respect.
In an unusual series of articles published by the Metropolitan News on the race between Robles and Elswick in the past 30 days, Grace has apparently gone from reporter, editor, and publisher to a stalking menace who has printed veiled threats toward Judicial Candidate Attorney Albert Robles.

The news last month that Attorney Albert Robles filed an intent to challenge Judge Carol Elswick, the only Los Angeles County Superior Court Judge to be publicly admonished by the state agency mandated to oversee judges’ conduct and behavior, caused the tabloid-like rag MetNews Publisher, Editor, and Reporter Roger Grace to call Robles within hours of his filing with the Los Angeles County Registrar-Recorder/County Clerk.
As reported by Grace in a subsequent article, Robles was in a meeting with a client at that moment he answered the incoming call from Grace. Robles reportedly told Grace he was busy. But, Grace pressed for an quick interview, that Robles accommodated about 20 minutes later.

The following day the MetNews published the news of Robles’ intent. What should have been a simple story of Attorney Robles challenging an incumbent Judge was instead a hit piece on Robles. Grace questioned Robles why he was challenging Judge Elswick.
First, the facts: The Commission on Judicial Performance, an independent state agency responsible for investigating complaints of judicial misconduct and disciplining judges pursuant to Article VI, Section 18 of the California Constitution, wrote that after having “considered the written and oral objections and argument submitted by Judge Elswick and her counsel, and good cause appearing, the Commission on Judicial Performance issued this public admonishment [because …] The commission concluded that Judge Elswick disregarded the fundamental rights of defendants, abused her authority, conveyed the appearance of bias and prejudgment, and violated the Code of Judicial Ethics.” This is the worse public admonishments in decades.
But instead the MetNews wrote lies and misrepresentations about Robles, so Robles sent a highlighted reply to Grace’s initial report where he noted errors and omissions in the first story written by Grace. (Side note: some have stated that Robles should just have left the MetNews misrepresentations alone, but I applaud Robles for having the courage to stand-up for himself, because if you don’t stand-up for yourself you are a pathetic coward and will NEVER stand for anything.)
Publisher/Editor/Reporter Grace responded by publishing another story with corrections, but without admitting that he was wrong, and with the news headline that Robles was infuriated by his initial story. The 77 year old Grace also revealed in this story that Robles had addressed him as a Dumb Fuck and had used the acronym WTF when seeking a correction. Obviously Grace did not appreciate the tone and had his feelings injured. Also incredibly, Grace actually admitted in that story that he had to seek help in learning the meaning of WTF! That deserves another WTF! Ironically, Grace’s reaction to the Dumb Fuck label and his admission of not knowing what is WTF is sort of validating of Robles’ point. So the battle was hereby initiated.

It is the primary job of a reporter to report the facts and not to make the news. It is not news if what you are reporting is factually inaccurate or misleading, and because of your bias the reporting is twisted to coincide with the writer’s opinion of what the news should be – this is Journalism 101.
Publisher Grace with a barrel of ink at his disposal has crossed the ethical line of journalism without a doubt. His series of 5 reports within a month of Robles challenging Elswick for the Los Angeles County Superior Court Judge is proof. In reviewing the MetNews internet site for the past four years bares this out, because at no other time in its history has the MetNews ever provided such personal antagonistic news coverage for any Judicial candidate. But also no one else has ever had the courage to stand-up to Grace to correct his misrepresentations and call him names.
But, as any person with common sense knows, journalists often are sworn at by the subjects of their news stories, it comes with the territory and should never change the factual reporting of the news. Think about it, imagine what the news would be like if every time a reporter that was sworn at or called a name reacted as publisher, editor, reporter Roger Grace has reacted, we would be in a dreadful news situation. This is why the MetNews and its publisher/editor/reporter Roger Grace actually earn the title of being a rag or distributor of yellow journalism.
We actually began this story after the second attack on Robles and have had to delay and edit this story 3 times already because Grace keeps putting out another report, and as of this morning there have been a total of 5 already within one-month. In the most recent report, Grace labels it his editorial endorsement of what he calls an unfit Judge who has received the worst public admonishment from the Commission on Judicial Performance in decades: Yet, because of his personal animus toward Robles Grace attacks Robles again with half-truths and misrepresentations.

Weighing the simple facts of this race between Robles and Elswick for Los Angeles County Superior Court Judge it is blaringly clear that it is time to make a change and fire the incumbent Judge Elswick. Elswick has revealed her temperament and been publicly admonished by the CJP for many proven incidents of misconduct and serious abuse of her judicial authority. This Judge should not be on the bench and in reality shouldn’t be allowed to practice law anywhere.

Publisher/editor/reporter Roger M Grace recently presented an anonymous quote from a current fellow judge about Judge Elswick:
“She [Judge Elswick] is not a very hard worker or team player. After 30 years on the bench, she is still doing primarily misdemeanors in a branch court.”
This clearly appears to indicate that even other current Judges are begging for the embarrassment of Judge Elswick to be removed.

In 1993, at the age of 23, Robles challenged an incumbent and won a seat to the Water Replenishment District of Southern California (WRD). WRD is the largest groundwater management agency in California, serving a population of 4 million residents in LA County. At the time of his election Robles was both the youngest elected official in California and the first Latino ever elected to the WRD. He was re-elected 6 times, a record.
The WRD recently named their internationally revered water recycling and environmental learning center after him. The Albert Robles Center for Water Recycling and Environmental Learning, for which he fought for 15-years against great odds to bring to fruition and because of his tireless efforts and this project, WRD (i.e., half of LA County) is no longer dependent on imported water and while Southern California is not completely drought-proof, this project is the biggest leap forward in almost 50-years to making Los Angeles County drought proof!
Accordingly, under Albert Robles’ leadership at WRD they received many national and international awards.

When COVID-19 first hit two-years ago, many cities in Los Angeles County did not know how to handle the problem, and were seeking a unified message, and many city leaders chose to follow Mayor Robles as their spokesman, a clear sign of respect to his integrity and leadership.
Mayor of Carson
Albert Robles was first elected to the Carson City Council in 2012, again defeating an incumbent, and he was elected Mayor in 2016, where he defeated a former incumbent Mayor of over 10 years.
Under his time as Mayor of Carson, Robles negotiated a deal with the NFL Chargers and Raiders that had the teams purchase the proposed 157 acre site (a vacant landfill for over 50-years) and then gifted for $1 to the City when the deal was not approved by the NFL. In other words, while Carson did not get the football stadium, as recently reported and confirmed by the Los Angeles Daily News, Carson came out a winner because of Mayor Robles as for the first-time ever the residents of Carson acquired control of this 157 acre siteand it can finally now be developed.
Also under Mayor Robles for the first time in Carson history, polluters are now taxed and this corrected a decades long environmental justice issue in the South Bay that no previous Carson Mayor ever attempted.
Robles also fought to change Carson to a Charter city which ended pay-to-play dealings, imposed term-limits and ended elected officials ability to double dip retirement benefits.
As an independent validation of Albert Robles’ leadership, Carson’s credit rating was increased for the first time in more than a generation.

Robles has a remarkable educational background. He attended public schools in Los Angeles County from elementary though high school. Upon graduating from high school with honors, he received a scholarship to attend the University of Colorado at Boulder, where he double majored and earned his Bachelor’s Degree in four-years. He then went on to Washington, DC as a United States Congressional Fellow, to return for graduate school at the University of Southern California, where he was a USC Merit Scholarship Recipient and earned his Master’s Degree. Thereafter, Robles obtained his law degree from the University of California, Berkeley School of Law, where he graduated with honors. With all due respect to Judge Elswick, when it comes to academic achievement and accomplishments, Robles wins hands down. Even Roger M Grace must agree, right?

MetNews Publisher/Editor/Reporter Grace tries to make a big deal about the lies told about Robles by his political adversaries, but the fact is Albert Robles has NEVER been accused under sworn testimony like Judge Elswick has been of “(1) disregarding the fundamental rights of anyone, (2) abusing his authority in any way shape or form, (3) conveying the appearance of bias against anyone, or (4) violating the Code of Judicial Ethics.” Again, Judge Elswick has been not only accused but proven conclusively of doing all these things and more, while Robles NEVER has and that is an undisputable fact. If any of the lies relied upon by Publisher/Editor/Reporter Grace were true, Albert Robles would have been disbarred a long time ago and not have been elected and re-elected all those times. At a minimum Albert Robles would have been convicted by his political nemesis Steve Cooley or Jackie Lacey for something, anything – BUT NEITHER EVER HAPPENED. (See, GUEST OP/ED: TITLED“ Justice Should Be Blind, But In Los Angeles It Is Not!!” By Albert Robles where he calls Cooley a racist for not prosecuting his White friends for political corruption and Jackie Lacey a carpetbagger for not living in LA County when she ran for DA.)

Facts Exposed: Robles Establishing a Publisher, Editor and Reporter as a Dumb Fuck Does Not Eliminate the Qualifications of Albert Robles

Albert Robles has jumped through all the hoops and has been verified by the Los Angeles County Registrar-Recorder/County Clerk as a qualified candidate to replace Judge Elswick. All the other noise and omissions by MetNews Publisher/Editor/Reporter Grace is pure poppycock and borne from a reporter who has lost his journalism compass because someone labeled him a dumb fuck. There are normally checks and balances to prevent yellow journalism like what Roger M. Grace has done and the best prevention begins when the publisher, editor, and reporter are not the same person. Sorry Roger but after 77 years it may be time to break the ink pin in half and to sell your barrel of ink so you can enjoy family and friends full time.
We attempted to contact both Roger Grace and Judge Elswick for comment but neither has replied. WTF?