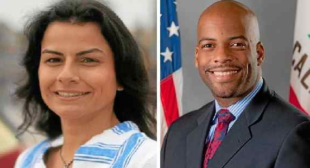 Hall, a state senator for less than 18 months, held 44.3 percent of the vote, with vote-by-mail ballots and less than half of precincts counted early Wednesday morning. He was followed by Barragan, an environmental attorney and fellow Democrat, with 20.8 percent of the vote. The nearest runner-up, community volunteer Armando Sotomayor, a Democrat, received 8.4 percent followed by Republican Ronald Siegel with 6.2 percent.

Under California’s “top two” primary system, Hall and Barragan will move onto the November general election seeking to replace Hahn in the 44th Congressional District, which includes South Los Angeles, South Gate and Willowbrook, and trails through Compton, Lynwood, Carson and north Long Beach into Wilmington, San Pedro and Terminal Island. Hahn has held the seat since 2011 but gave it up to run for the Los Angeles County Board of Supervisors.

Hall, a 44-year-old career politician, won his first elective office on the Compton school board in 2001. He was elected to the Compton City Council two years later. In 2008, he won a seat in the Assembly’s 64th District that he held until taking the 35th Senate District in a special election when former Sen. Rod Wright was convicted of perjury and voting fraud for lying about his where he lived.

Barragan, 39, grew up in Carson and attended UCLA and USC Law School before beginning her career as a securities litigation attorney in Washington, D.C. She returned to the South Bay and won a seat on the Hermosa Beach City Council in 2013. She held office there only two years before vacating her seat to run for Congress. While on the council, she fought for progressive environmental initiatives, particularly against an oil company’s bid to drill wells near the beach.

In the South Bay’s other two congressional races, incumbent Reps. Ted Lieu and Maxine Waters automatically move onto the general election because they each faced only one challenger Tuesday.

Lieu and Waters are expected to waltz to re-election in the fall.